Robert Whittaker with the UFC middleweight belt held on his shoulder. 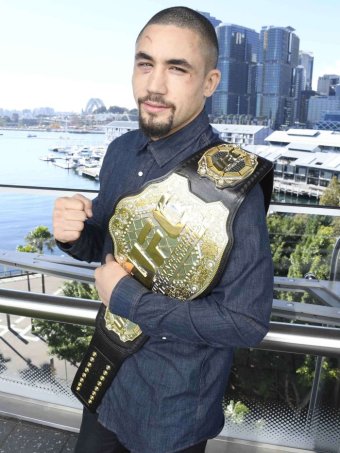 On Sunday in Las Vegas, in front of nearly 13,000 spectators and millions more watching worldwide, Robert Whittaker did what no other Australian has been able to do.

The 26-year-old had his hand raised after getting the better of five brutal rounds in the octagon against Cuban Yoel Romero. He now gets a shot at world middleweight champion Michael Bisping.

In Sydney, 12,000 kilometres from Las Vegas, Whittaker’s father Jack watched on while babysitting Robert’s eldest child, also named Jack, full of nerves and waiting for a sign from his son.

“When he comes out he taps his chest, and a lot of people might think he is tapping the Southern Cross,” Jack Whittaker said.

“But many times I can’t get to the fight so I told him if I can’t be there just tap your chest and put your hand on your heart and I will be there, it will be me and you fighting him.

“So he does that when he walks out or if he is coming across some struggles. He will tap his heart and he knows I am there in spirit. When I see him do that I just feel so proud.”

Jack Whittaker was not surprised to see his son shake off a knee injury he sustained in the first round and continue to dig deep and take the fight to Romero.

When he heard the ring announcer read out his Robert’s name as the new champion, he was overwhelmed by emotion.

“I was just so glad he wasn’t hurt or injured or cut, but just so proud that not only he is my son, but he is just a local boy from Menai,” he said.

“We grew up as a single-parent family in a housing commission [home]. It was just me, Robert and his brother. It just goes to show [what you can achieve] when you put that hard work in.”

Whittaker’s title victory is the result of dedication to the sport that began at the age of seven. He loved to play rugby league for his local team, the Menai Roosters, but father Jack said once the season was over there was a need to keep the active youngster busy.

“We needed something to keep him fit. I knew one day he would be catching buses to school and all that so I thought for a bit of protection I would get him into karate or some kind of martial arts,” he said.

“Later on in school he got bullied a little bit so I thought it was a good idea that he keeps it up, not to fight back but just for his self-confidence so he could handle himself, and the bullies at school wouldn’t be such a problem for him.

“All the bullies are his best mates now, he will never get bullied again.”

Desire wins through for Whittaker against Romero
Robert Whittaker walking with his right arm held in the air inside the Octagon after beating Yoel Romero. 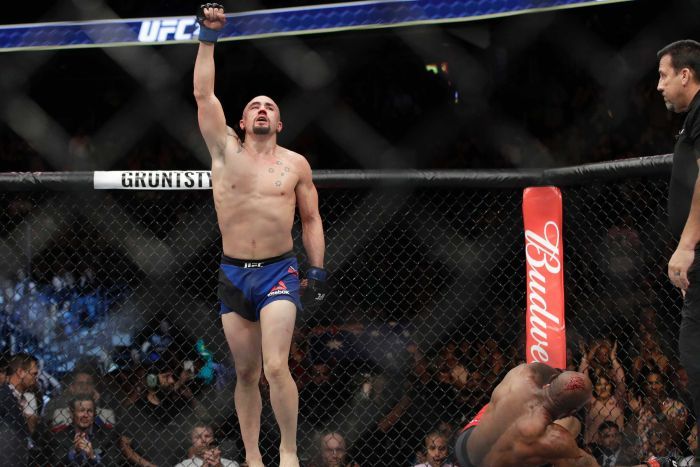 Whittaker, less than 48 hours after his historic UFC title win, said the gravity of what had transpired on Sunday had not hit him yet.

“I am waiting for some kind of revelation to kick in,” he said.

The unanimous-decision win over Romero was all the more courageous after he was injured early in the first round, but battled on to finish on top.

“The fight was a bit of a blur and a lot of adrenalin, everything in the fight was centred around my lead left leg, then 20 seconds into the fight he stomps on it as hard as he could,” Whittaker laughed.

“I remembered in the fight there was a point where I thought how bad do I want this, and I knew I had to work harder than him.”

Next up is the official world middleweight title fight against Bisping. There has been talk of the event being held on Australian shores, with Perth and Melbourne mentioned as possible venues.

Whittaker would love the bout to be staged in his hometown of Sydney but that is unlikely.

For the time being Whittaker said there was no rush to get the wheels in motion.

“I would love to have a couple months off to really work on the rehab,” he said.

“I am young enough now that my body bounces back quite well. I think Michael himself is still healing, there’s plenty of time to hype up the fight.”

Bisping tried to talk up their bout immediately after Whittaker was handed the belt on Sunday. He stormed into the octagon and told Whittaker “he should be ashamed of himself” for wearing the belt like he is a champion.

Despite the baiting, Whittaker refused to get into a war of words with his future opponent.

“That’s the thing — I am just being me,” he said. “I don’t have any ill will towards any of my opponents, I understand we are the highest calibre of athlete in this sport and we will both go and give it our all.

“But I don’t want anyone to misinterpret what I am saying, when we step into that octagon and we touch gloves, I am going to break his face.”